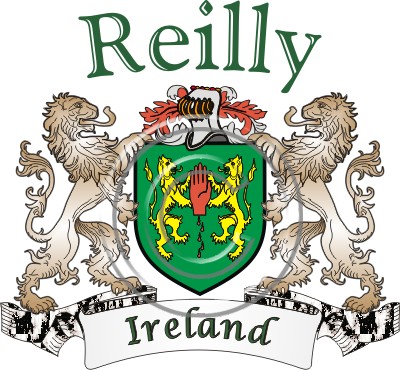 The name Reilly is an Anglicised form of the Gaelic Ó Raghallaigh and the patronymic form of the Irish name Reilly. The surnames Reilly and O'Reilly are found throughout Ireland, with most residents found in County Cavan, Longford, Meath, Westmeath, Fermanagh and Monaghan, in that order.

In the Reilly coat of arms, the bloody hand symbolizes Faith, Sincerity, and Justice. The motto for the Reilly family is, "With Fortitude and Prudence."

Variant spellings of the Irish surname Reilly include Reilley, Reily, Riely, Rielly, Riley, Rilley and many others.

The Irish Rose carries two items which may provide you with more details about the Reilly family in Ireland, their family crest, and other historical notes.

We also carry Reilly caps, shirts, flags, mugs, etched glassware, and heirloom products. Visit our coat of arms page to see all the items available with the Reilly name and family crest.

There are a number of pubs in Ireland named for the Reilly and O'Reilly families.

If you can't visit one of these fine establishments, our personalized pub gifts are the next best thing!