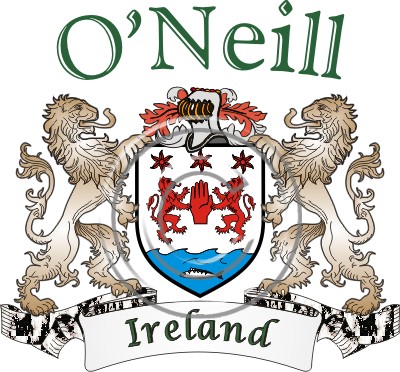 The surname O'Neill is ultimately of Irish Gaelic origin. It is an Anglicization of the original Gaelic Ua Néill, composed of the elements ua, meaning "grandson" or "descendant," and of the Gaelic name Niall. The meaning of the Niall is disputed, but has been suggested as "cloud," "passionate," or "champion."

The progenitor of the family is said to be Niall Noigiallach of the Nine Hostages, which legend claims was the High King of Ireland in the fifth century. However, it was the grandsons of Niall Glúndub, himself a descendant of Niall Noigiallach, who lived in the tenth century and who would have been the first to use the surname.

It is due to the Anglicization of the original Gaelic that the several spelling variations have emerged, during the transcribing of the name into English. Irish and Scottish variants also exist and include MacNeal, MacNiel and MacNeill, which arose when the ua element in the name was replaced with mac, meaning "son of." Ó has replaced Ua since the end of a standard Gaelic and its gradual evolution into Scottish, Manx and Irish. O'Neill is also occasionally found used as a given name. Other variant spellings of the Irish surname O'Neill include O'Neil, Neal, Neale, Neales, Neil, Nihill, O'Niel, O'Neal, and Neill, among others.

The red hand in the O'Neill family crest is explained by several slightly differing legends. They share a common theme that begins with a promise of land to the first man that is able to sail or swim across the sea and touch the shores of Ireland. Many contenders arrive, including a man named O'Neill, who begins to fall behind the others. Using his cunning, O'Neill cuts off his left hand and throws it onto the beach before the other challengers are able to reach shore, thus technically becoming the first of them to touch land and wins all of Ireland as his prize.

However, the legends seem to originate in the seventeenth century, several many centuries after the red hand was already borne by the O'Neill families.

Learn more about the O'Neills

The Framed Irish Family Name History, (#1760) has more information on the O'Neill surname. There is a wide selection of O'Neill coat of arms products at The Irish Rose. Please visit the Irish Coat of Arms page.

Visit an O'Neill pub in Ireland

There is at least one pub in Ireland named for O'Neills. O'Neill's Bar & Steakhouse is in Maynooth, County Kildare, serving patrons since 1912. Visit the O'Neills in Maynooth the next time you're abroad.

If you can't visit in person, our personalized pub gifts are the next best thing!