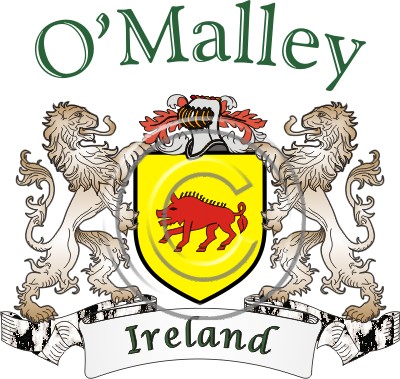 O'Malley is a surname of Irish origin. O'Malley is an anglicisation of Ó Máille, which means a descendant of a follower of St John. O'Malley is most often associated with Ireland's County Mayo.

Variant Spellings of the Irish surname O'Malley include O'Mallay, O'Mally, O'Mailley, O'Mealey, and many more. The O'Malley clan is often associated with sailors and the clan motto is, "Terra Marique Potens," which is Latin for, "Powerful on Land and Sea."

Other coat of arms products we carry provide more information about the O'Malley coat of arms and family name history.

Browse a wide selection of O'Malley coat of arms products at The Irish Rose. Visit our Irish Coat of Arms page for great gift ideas.

There is a pub with the O'Malley name on it in Westport, County Mayo. The John J. O'Malley Bar and Restaurant (called JJ O'Malleys) features full dining and live music.