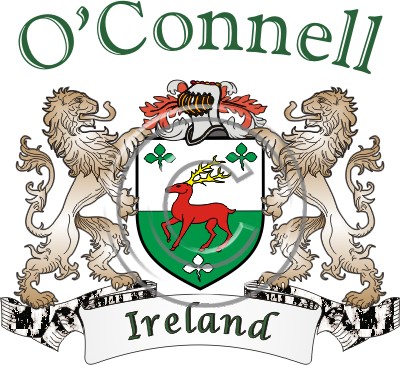 O'Connell is a surname of Irish origin. It is an Anglicisation of the Gaelic Ó Conaill, meaning "descendant of Conall." The personal name Conall is possibly composed of the elements con (from cú meaning "hound" or "wolf") and gal (meaning "valour").

The O'Connell family, principally of Derrynane, are a Gaelic Irish noble family of County Kerry in Munster. The principal seat of the senior line of the family was Derrynane House, now an Irish National Monument.

The O'Connell family crest and coat of arms

The O'Connell coat of arms features a its buck and three shamrocks on a field of green and white. For detailed O'Connell name history information, our Framed Irish Family Name History (#1760) has more information on the O'Connell family origins and surname.

The Irish Rose has a large selection of O'Connell coat of arms items. Items featuring the Irish counties connected to the O'Connells include Irish County mugs and Irish county coat of arms flags.

Looking for O'Connell pubs in Ireland?

We found a couple of pubs in Ireland with your family name. Be sure to visit one or both on your next trip to the Emerald Isle.

If you can't visit and O'Connell Irish pub in person, our personalized pub gifts are the next best thing!