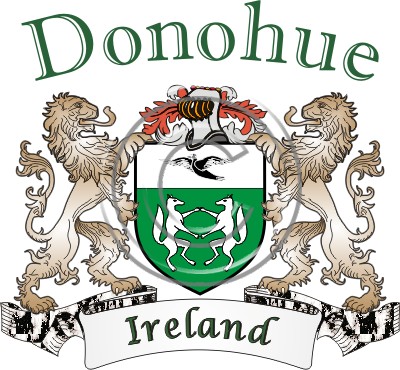 Donohue or Donahue is the Americanized version of Irish surname Donohoe, which, in turn, is an Anglicized version of the ancient Irish name "Donnchadh" (sometimes "Donncha").

Donncha was a common “first name” in 9th Century Ireland, and when the use of surnames became more common in Ireland around the 10th Century, many people looked to a respected common ancestor to form a surname. The ancestors of the modern Donahues took the name O’Donnchadha, meaning "the son of Donnacha" or "of the line of Donnacha". The modern Donahues are descended from one of at least eight unrelated Donnachas, each of whose descendants adopted the surname O’Donnchadha.

There are eight known O'Donoghue tribal areas in Ireland; in Munster the areas of Tipperary, Cork and Kerry, then there are Kilkenny, Wicklow, Dublin and Meath in Leinster and in Connaught there are Galway, Mayo, Sligo and Cavan. Considerable migration took place over the centuries and family groups took root in many other counties (e.g. Clare, Limerick, Waterford, Roscommon, and others), which would today be recognised as their areas of origin.

The Donohoes of the ancient Kingdom of Breifne, centered in modern-day Co. Cavan, are genetically linked to 4th-century Irish warlord Niall of the Nine Hostages.

When the name O’Donnchadha became Anglicized, at least 30 different spellings developed in Ireland, but by the 19th Century the most common spelling was "Donohoe." Of 2,800 families reporting variations of the name at the time of Griffith’s Valuation (1847-1864), 2,483, or 88%, were listed as “Donohoe.” None were listed as “Donahue.” The name distribution geographically during this same period reflects that there were significant clusters of Donohoes found in various parts of Ireland, including County Cavan, County Cork, County Galway, and County Kerry.

The Framed Irish Family Name History, (#1760) has more information on the Donohue surname. There is a wide selection of Donohue coat of arms products at The Irish Rose. Please visit the Irish Coat of Arms page.

Is there a Donohue Pub in Ireland?

The closest thing we could find to a Donohue Pub in Ireland is John V. Donohoe "Jack's" Corner House in Mostrim, County Longford. If you can't visit in person, our personalized Donohue pub gifts are the next best thing!